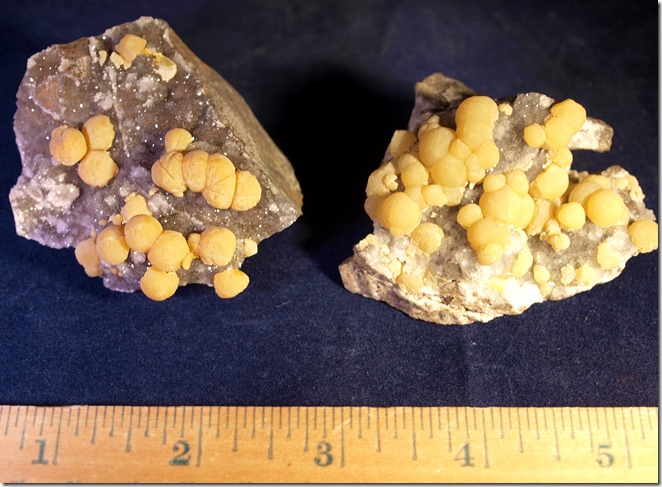 Turkey fat smithsonite is the common name for the variety of zinc-ore mineral pictured above.  It derives its name from its yellow color and globular crystal habit (called botryoidal which is Greek for bunch of grapes).  The yellow is due to the presence of cadmium.  Early miners likened its appearance to the fat of a delicious turkey.

Smithsonite, along with other lead- and zinc-bearing minerals, was mined in the lead/zinc districts of the northern Ozark Plateaus and the western Ouachita Mountains.  Production started in 1857 and ended in 1962, with the peak occurring during WWI.  Though mining has ceased, it’s estimated that 110,000 short tons of shallow resources remain, and significant deeper deposits may, as of yet, have gone undiscovered. 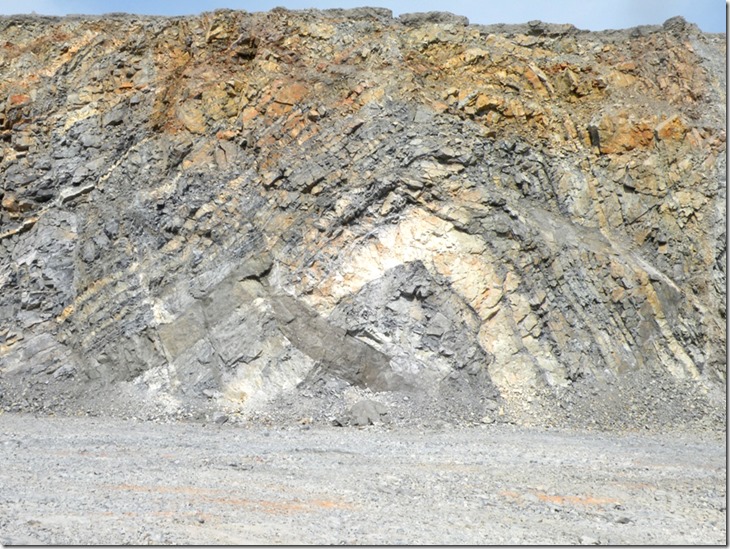 This photo is of an asymmetrical anticline in the Stanley Formation.  It’s asymmetrical because the right limb of the fold is dipping at a steeper angle than the left limb.  This type of fold is common in the Ouachita Mountains, however, this one has a small igneous intrusion on the left limb (lower left, dark gray).  The intrusion consists of a dike, which split several of the lower beds at nearly a right angle, and a sill emplaced parallel to the bedding.

From this picture, and basic geologic principals, we can tell the history of these rocks.  Sediment was first deposited in horizontal layers (principal of horizontality).  Later, the layers cemented to form solid rock – the layers must have been firm before they were deformed because they maintained their shape.   Next, tectonic forces in the earth bent the rock into an anticline and, after it was folded, the igneous intrusion was forced into the rock. We know the intrusion was last because it cut across the rock layers and the fold (principal of cross-cutting relationships).

One of the most challenging aspects of geology is interpreting a lot from a little information.  It’s also part of what makes it so interesting! 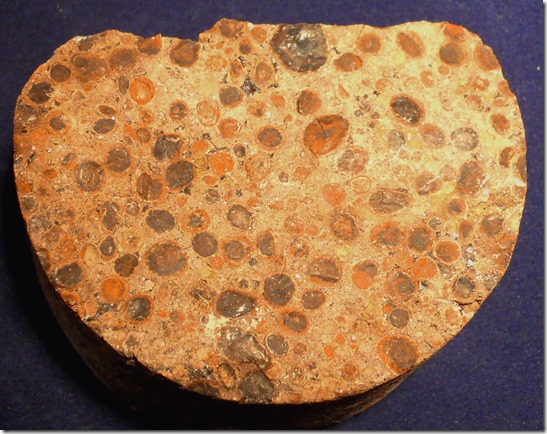 Pictured is a piece of bauxite, a sedimentary rock for which the central Arkansas town of Bauxite is named.  It’s also the principal ore of aluminum.  At times in the past century, Arkansas bauxite was the source of as much as 90% of the aluminum produced in the US.

Bauxite is a chemical sedimentary rock that formed in Arkansas from weathering of igneous rock.  During the Eocene (55 – 34 million years ago), North America was nearer the equator, and the tropical climate concentrated aluminum in rocks exposed south of Little Rock.

Following WW2, production of aluminum from Arkansas bauxite declined due to availability of rich international ores.  Mining of bauxite for aluminum ceased altogether in the state in 1981, though there is still a significant quantity of reserves.

I’ve posted a little about concretions before, but on a visit to the Capitol building in DC this week our tour guide pointed out small iron concretions weathering from the pillars which he said have been mistaken for British bullets that are lodged in the sandstone columns.

Concretions, if you recall, are mineral masses that grow in rocks by precipitation, usually from mineral-rich groundwater.  They are often visually interesting and probably the most misunderstood rock or mineral on earth.  Like billowing cumulus clouds, they take on fantastic shapes that  lead to colorful interpretations from the uninformed observer.

Here is a collection of odd or interesting concretions gathered from various parts of Arkansas. 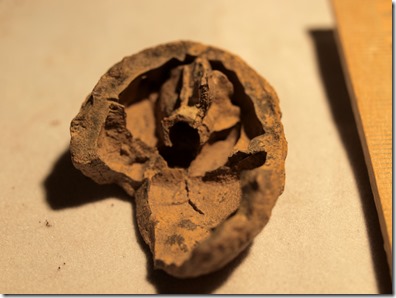 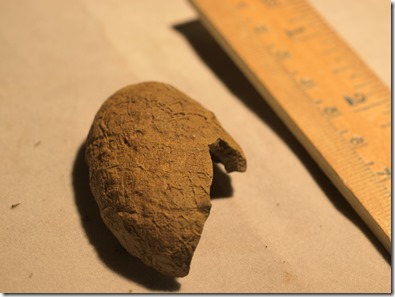 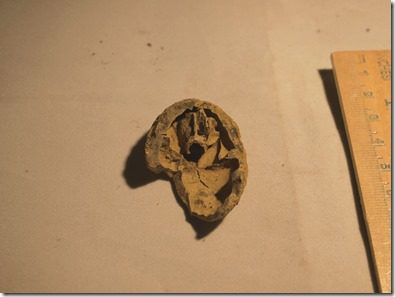 This one in the above pictures is just begging to be called a fossilized egg. 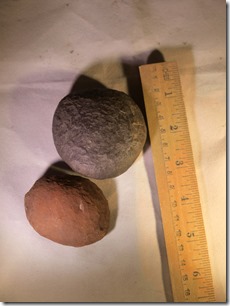 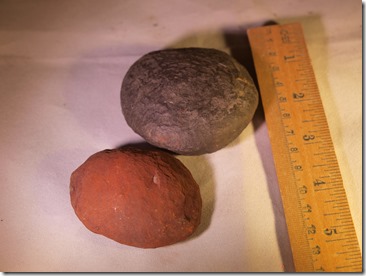 These are a couple of disk-shaped concretions that grew between beds of shale.  If we were to cut them open they would look something like these next ones 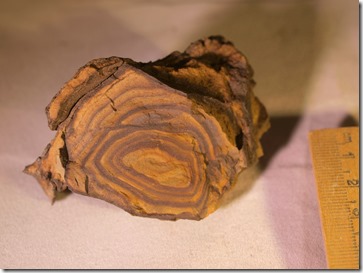 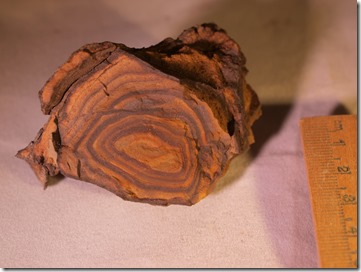 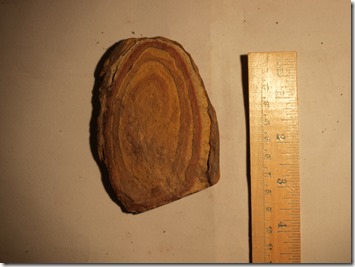 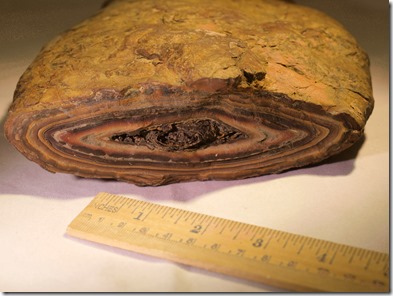 The iron minerals in the above examples have arranged themselves in near-concentric bands. 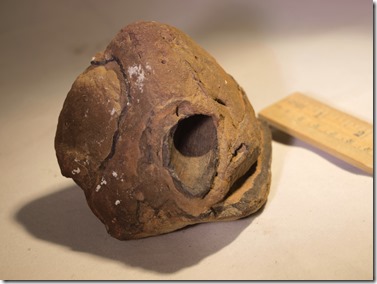 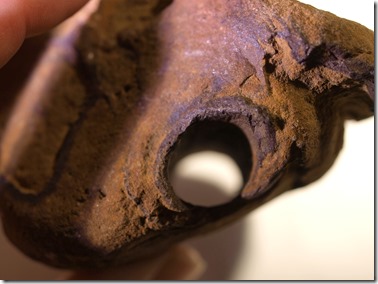 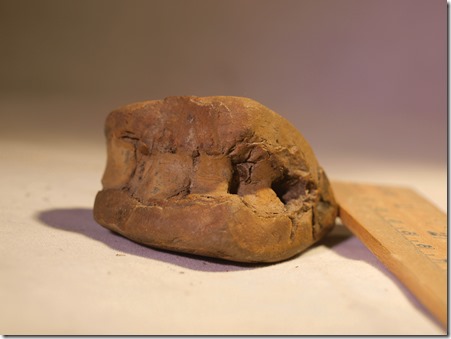 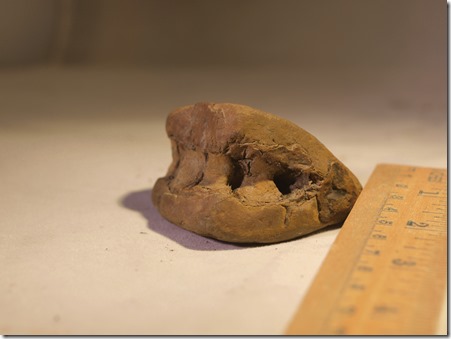 Finally you have my personal favorite – Ancient Native American dentures!

Hope you enjoyed these and next time you find an interesting concretion you’ll know what you’re looking at.