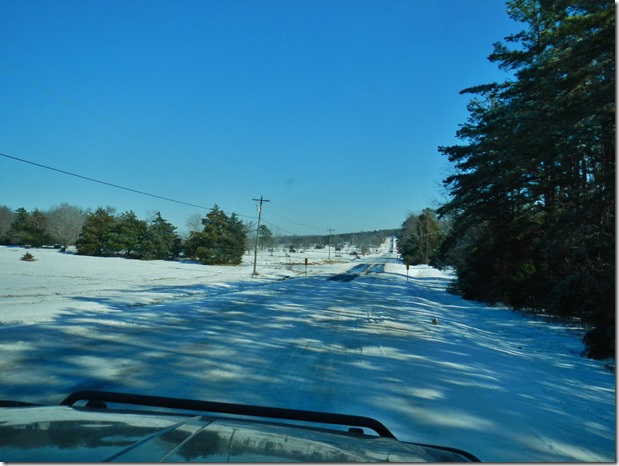 Well, we did have a winter weather event last Friday that was still on the ground in the field area the following Tuesday.  Roads were fairly clear to Clinton, but between Clinton and Shirley it was still mostly patches of snow and ice.  North of Shirley, the roads were pretty much all covered with snow and ice.  Even “Goldy” (our Jeep) got stuck briefly when Danny decided to stop and check his map almost at the top of a hill.

Tuesday we managed to get to a drainage south of the Middle Fork that had fairly low relief, so were able to climb down the side and follow it on down.  There were some very large footprints in the snow along the valley floor that may have been a feral pig, but don’t know for sure.  It’s amazing how the critters always choose the easiest route.  Their trails are usually pretty good for people too, though they don’t often care about avoiding briar patches.  The snow was pretty crunchy, so fairly good traction.  Having snow on the ground rather evens out the terrain in an odd way, though you have to be poised to catch yourself with every step.  Had some massive sandstone units, but they were blocky and non-calcareous, so we’re in something different than on the north side of the river.

The next day we managed to make our way north of Shirley to a couple drainages at the head of Indian Creek that we had skipped when we did the lower end.  As it happened it was a pretty good choice because the relief was rather low and the bottom was fairly wide.  Also, it was south-facing which helped to melt the crusty snow and maybe keep us a little warmer.  We saw mostly massive calcareous sandstone units of the Witts Springs though may have gotten into the Bloyd in the higher elevations.  At the end of the day we entered an area that still showed signs of damage from the Jan. 2009 ice storm that coated most of northwest Arkansas with a thick layer of ice and downed many trees–many by the roots.  Witnessed a beautiful sunset on the way out though.  We were near 1400 feet which is about the highest elevation on the quad.  The trees there were still coated in ice from last Friday’s storm. 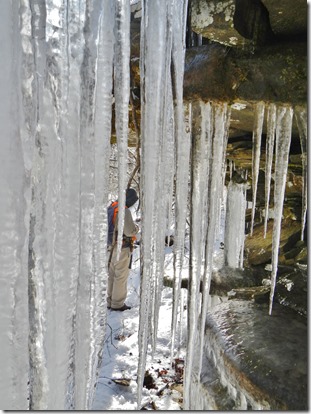 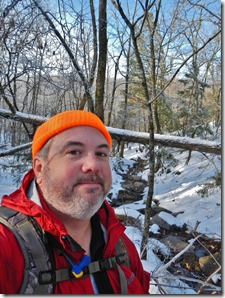 Thursday we tried another drainage near the one we hiked on Tuesday.  This one was north-facing and proved to be too steep and narrow a descent to do with so much snow on the ground.  The snow had developed a thick icy crust from thawing and refreezing, and we had to break through it to get traction.  I managed to get up and around on the side of a particularly narrow spot in the creek bed, and was waiting for Danny to follow when I saw him retreating back upstream.  I later found out that he couldn’t find purchase on the icy banks, so decided to return the way we had come.  Since I had gotten farther downstream by breaking through the crusty snow and climbing down the steep side, I had no choice but to climb back up that way.  I found that going on up was less hazardous than going back down toward the creek, so I continued to climb up the side and by the time I drew even with Danny was probably 100 feet higher.  I could barely see him down there, but managed to get a photo of him climbing up the drainage.  We’ll have to try that one again when the snow is gone!

After that, we got a few points on Weaver Creek were it leaves the western edge of the map, and headed back to Little Rock.  Hope this clears up by next week!  Until then, see you on the ice-covered outcrop!