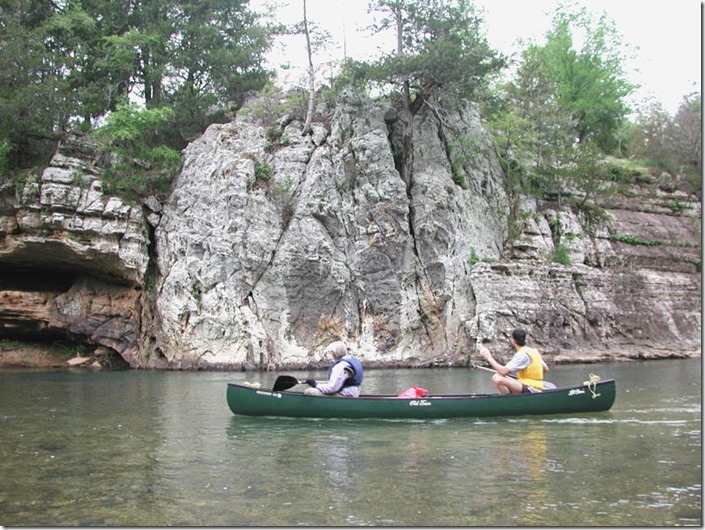 This is a picture of a paleokarst feature from the Upper Buffalo River in Newton County, Arkansas.  Paleokarst features, like this one, are ancient caves or sinkholes that have been preserved in the rock record.

In this case, a sinkhole formed when bedrock was exposed above sea level and acidic rainwater dissolved a vertical pit in the bedrock.  When sea level rose and covered the area again, more sediment was washed in and the sinkhole was filled with sand.  Eventually the sand became sandstone and a cast of the sinkhole is preserved today (center of photo).

All of this happened about 450 million years ago.  Paleokarst features are one more clue geologists use to decipher earth’s history.  If you didn’t know better, you might float right by and never give it a second thought. 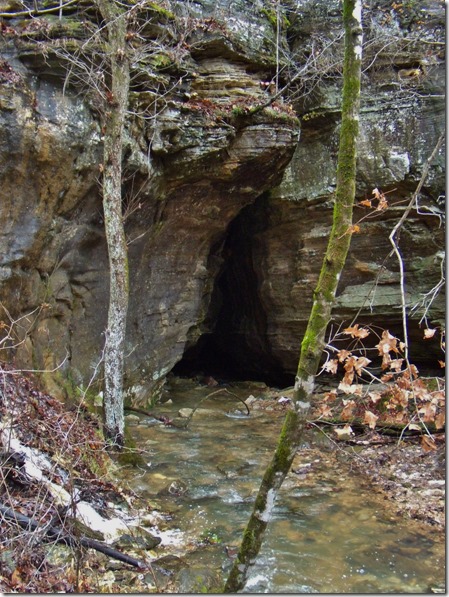 The above picture shows what can happen when a sinkhole forms in the channel of a creek.  This photo is taken facing in what use to be the upstream direction.  If you look carefully, you can tell that the water is actually flowing into the fracture; the sinkhole has captured the flow of the creek and caused a strech of it to flow backwards.

Sinkholes form in a variety of ways, but this one evidently was the result of sudden collapse of bedrock into a subterranean cave that was forming below the land surface.  You can’t see the sinkhole itself because it’s just inside of the dark opening in the rock.

If the photographer were to turn around and snap a picture in the downstream direction, you would see that the stream bed is dry just downstream.  In geologic terms this is called a disappearing stream.